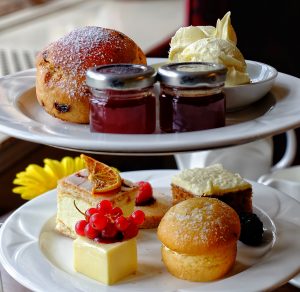 A blog commissioned by The Hotel Collection and The Billesley Manor Hotel about the history of afternoon tea.

With dainty finger sandwiches, delicate little cakes and delicious scones with lashings of jam and cream, there’s nothing quite so quintessentially British as afternoon tea. As a nation, afternoon tea has been one of our favourite pastimes since the early 19th century. But the popularity of TV shows like The Great British Bake Off in recent years has given this great British culinary tradition a whole new lease of life.

The British aristocracy is said to have introduced the tradition of afternoon tea. In 1840 Anna Russell, the 7th Duchess of Bedford started to dine on bread, butter and tea in the afternoon, as a bridge between breakfast and supper. The Duchess began to invite her friends to join her, and before long afternoon tea was established as a private social function across fashionable society.

Blog written for The Hotel Collection, to promote social banqueting at The Billesley Manor Hotel near Stratford-upon-Avon.

Balancing work and social time can be tricky as we all lead busy lives. Relying on technology to help us keep in touch with family and friends has become the norm. But social gatherings are a great opportunity to build stronger bonds and create lifelong memories to treasure. Spending time together can be good for our emotional wellbeing too.

Looking for somewhere special to celebrate a big birthday, special anniversary or another momentous occasion? The team at The Billesley Manor Hotel are passionate about turning special occasions into memorable celebrations.