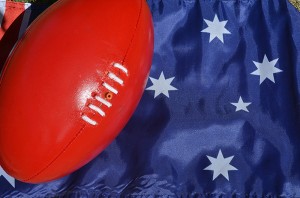 The British love football with a passion. But it seems we don’t have a monopoly on our obsession for watching grown men in shorts running around a football pitch chasing a ball. Australians, I’ve discovered, are just as fanatical about their footie. Perhaps even more so, because in Australia footie fans have not one but four different codes to follow; depending on whereabouts they are in the country, the term “footie” can apply to Australian Rules Football, rugby union, rugby league or soccer.

Generally speaking, in Australia footie alliances tend to be dictated largely by location. For example, in Western Australia, South Australia, and Victoria, Aussie Rules dominates, whilst rugby union and rugby league are more popular in New South Wales and Queensland.

All four footie codes are an important part of Australian culture though, occupying the hearts and minds of many Australians. The uniquely Australian Aussie Rules which, to this Australian sports novice comes across as a mash up of rugby and football, remains Australia’s number one spectator sport. Interestingly, whilst Aussie Rules is very much home grown, the other three codes have one thing in common – their roots can be traced back to England.

When payments to players in the English Rugby Football Union became an issue, the Rugby League was eventually formed in1895. Originating in the working class northern counties of Lancashire and Yorkshire, League made it over to Australia in 1908. Today an iconic Aussie ball sport, rugby league is widely regarded as the third most popular sport in Australia, particularly in the eastern states. Known for its fast pace and entertaining play, it’s certainly one of the toughest and arguably the most physically demanding of the four codes.

Traditionally a more prestigious game compared to rugby league, rugby union was first introduced into Australia in 1864. A popular sport for public school boys attending England’s most elite schools during the early 19th century, rugby union remains as popular in its home country today. It was said to have begun life during a game of football in 1823 at Rugby School in Warwickshire, one of the oldest independent schools in the country. As legend has it, one of its pupils, William Webb Ellis ran with the ball when he was supposed to kick it. Rightly or wrongly, Ellis has been credited as the inventor of rugby football. Prior to that incident, rugby was played in a similar way to football, with the notable exception that players could catch the ball and kick it out of their hands. By 1830, running with the ball became part of the play.

Probably the most popular team sport in the world, in many countries soccer holds something of a religious status. But compared to the rest of the world, soccer in Australia has enjoyed a relatively modest following since being introduced by British immigrants in the late 19th century. Mass immigration from mainland Europe after World War II helped revive its profile for a time, but by and large soccer continued to be overshadowed by Aussie Rules and rugby. To many Australians the so-called beautiful game remains a foreign sport, but more and more young people are taking an interest in the game. And the arrival of immigrants from Europe, Asia and the Middle East – countries where soccer is the only type of football they follow – and know how to play – will only help to raise its profile.

The Australian football landscape at a glimpse