It’s been over 13 years since The X-Files last graced our TV screens. As a self-confessed X-Phile (in other words a huge, huge fan!) I’m counting down the days until 24 January 2016, when the show makes its much anticipated comeback with six brand spanking new episodes.

I’ve been somewhat obsessed (and I mean that in a good way!) with The X-Files since those very first episodes of the early nineties. I still remember the huge sense of loss I felt back in May 2002, when the two hour season finale aired; bringing my beloved Mulder and Scully’s small screen paranormal adventures to an end after an incredible nine seasons and 201 episodes. I certainly never thought I’d see the show make a comeback – especially after such a long absence and two movies which never quite lived up to their full potential and promise. 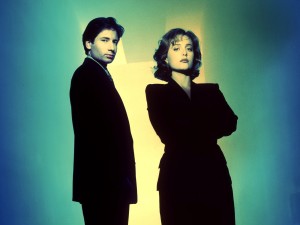 Watching Mulder and Scully swap the small screen for the big with Fight the Future (1998) and I Want to Believe (2008), to varying degrees of success, was somewhat bittersweet. Thankfully David Duchovny and Gillian Anderson’s chemistry lived up to the shows’ small screen legacy in both outings. But while Fight the Future made for an enjoyable big screen transition, the standalone X-Files adventure I Want to Believe suffered from a poor plot and bad casting. But then movie adaptations of popular TV shows don’t always work (think Entourage, Sex and the City, Miami Vice) and ultimately both films proved that TV was The X-Files‘ rightful home.

Of course, back in 1993, no one knew whether the show would last a season, yet alone nine years. In those early days, even lead David Duchovny doubted the show’s longevity. After all, who’d have thought a show about two FBI agents investigating paranormal activities and government cover-ups week in week out had staying power. If the truth be told, it was only good word of mouth and positive critical response that kept the show alive and convinced Fox to pick up the series for a second season. More often than not similar themed shows counted their blessings if they survived a whole season.

But right from the Pilot episode, it was clear that there was so much more to The X-Files than just UFOs and little green men. Here we had an episode that looked and played more like a feature film than the pilot of a TV show. Visually stunning and tightly written with a moody style to compliment its dark nature, as pilot episodes go it was in a league of its own. From the teaser sequence depicting a UFO abduction to the closing moments in the Pentagon vault, we were privy to the origin of a show that would inspire a generation and spawn more than its fair share of wannabes.

And it was the show’s protagonists who would be an integral part of turning The X-Files into a TV phenomenon. In Fox William Mulder and Dana Katherine Scully we had two of the youngest – not to mention sexiest – FBI agents ever seen on TV. No, scratch that; ever seen, period. Who can forget the moment in the Pilot when a scantily clad Scully asked Mulder to examine some strange marks on her back? Okay, so they turned out to be nothing more than mosquito bites, but the fact of the matter is, in that instance, so began the longest flirtation in TV history; a flirtation that the show used to keep the series fresh, exciting and always one step ahead of the competition. Their will-they-won’t-they relationship captured the hearts and imagination of millions of viewers across the globe.

As we know now, the fact that they didn’t end up in a passionate clinch in the Pilot was essential to the plot and essential to the establishment of Mulder and Scully’s relationship. Creator Chris Carter was adamant that the agents would never consummate their attraction so easily; he knew that the show would die a slow death if he gave in to temptation – and the wishes of network execs. The nature of Duchovny and Anderson’s chemistry was central to whether the show would work – and the nature of Mulder and Scully’s relationship was central to whether people would keep on watching. And the rest of course is TV history. Mulder and Scully topped poll after poll as the sexiest couple on TV. Internet chat rooms were swamped with fans dissecting Mulder and Scully’s will-they-won’t-they relationship. And magazine after magazine ran exclusive photos of the two stars in various states of undress – who could forget that infamous Rolling Stone ‘in bed’ cover. And X-philes couldn’t get enough.

Speaking of magazines, at the height of the show’s popularity, it seemed as though you couldn’t go anywhere without seeing Anderson and Duchovny’s faces plastered somewhere. Posters, T-shirts, books and magazine cover after magazine cover. The X-Files was everywhere; the show had taken on a life of its own. It became more than just a TV show. It became a global phenomenon turning its stars into global icons no less. Mulder and Scully even appeared on an episode of The Simpsons!

There’s no doubt that the casting of Anderson and Duchovny was the coup of the nineties and The X-Files milked interest in the most asexual sexual relationship ever seen on TV. But it wasn’t just Duchovny and Anderson’s onscreen chemistry that made The X-Files so popular and successful. In fact, if it hadn’t been for the creative genius of Chris Carter, neither Mulder nor Scully would exist. And if it hadn’t been for Mulder and Scully, actors Duchovny and Anderson might still to this day be waiting for their big break.

In 1992, former surfing magazine writer/editor and sitcom writer/producer Carter signed a development deal with Twentieth Century Fox television. Carter had been captivated and scared by the 1971 made-for-TV movie The Night Stalker – which spawned a sequel and a TV series – and he wanted to create a series that would evoke a similar reaction in a new generation. And so The X-Files was born. And over nine years, Carter and his team of writers, directors and producers delivered some truly groundbreaking TV. Who can forget the infamous Home, the first episode (although not the last) to broadcast a warning about the show’s graphic content before its broadcast. Or the Scully abduction storyline arc comprising of Duane Barry, Ascension and One Breath. (It was Gillian Anderson’s real life pregnancy that provided the need to separate Mulder and Scully. One can only wonder as to what direction the show would have taken if that situation hadn’t arisen.) Or the exquisitely executed Memento Mori. Or the split-screen Triangle (notable for being filmed in letterbox format). Or the black and white The Post-Modern Prometheus. Or The X-Files’ first real attempt at comedy, Humbug. (More about that in a moment!) It’s thanks to Carter and co. that we were introduced to some of television’s most memorable characters; like the Cigarette Smoking Man, the Lone Gunmen and Eugene Victor Tooms.

The X-Files may have started life as a scary science fiction show, but it soon became apparent that to label the series as a purely science fiction show was to not do it justice. In fact, by the end of the third season, The X-Files was displaying a talent for of all things comedy! And that was largely thanks to the success of season two’s Humbug. When the episode was first broadcast in the US back in March 1995, almost ten million homes tuned in; Humbug was a hit with fans and so began The X-Files’ love affair with comedy. Some of the most rewarding episodes have had their roots in comedy, most notably War of the Coprophrages, Jose Chung’s From ‘Outer Space’ and Bad Blood. One thing’s for certain, Mulder and Scully knew how to wield a sharp one-liner as good as Seinfeld and Frasier et al.

By the time Season three aired The X-Files was well into its stride and Season four saw the show at the top of its game, producing perhaps its finest episode ever in the beautifully executed Memento Mori. Season five was plagued with rumours of David Duchovny’s imminent departure and by the end of the season, production in Vancouver was to switch to Southern California. The hiatus between seasons five and six saw The X-Files up the ante on the big screen. But success usually carries its own seeds of destruction and by this stage the show that had started out as a cult hit only to go mainstream in a big way was starting to show signs of slowing down and becoming a cult again. By the time Season eight came to fruition, David Duchovny had left (albeit popping up sporadically) and the show had seen the introduction of a new lead, played by Robert Patrick. Season nine saw its popularity decline, leading to its inevitable demise.

After nine seasons on TV, The X-Files ended on May 19 2002. Opinion was divided as to whether it was a satisfactory conclusion to nine years worth of exceptional TV. But be in no doubt: The X-Files was (alongside Friends) the show of the nineties. It went down in TV history as the show which popularised the science fiction genre. Thanks to The X-Files no longer was sci-fi perceived as anorak telly. Thanks to The X-Files sci-fi became cool.

I don’t know about you, but in my opinion TV hasn’t quite been the same without Mulder and Scully. I for one can’t wait to see this multiple Emmy-winning series back where it belongs.

The Impact of The X-Files was first published in the Official X-Files Yearbook 2002. This article has been updated and rewritten in line with current events.