In honour of what has been a monumental, groundbreaking television series, The Official X-Files Magazine has chosen ten of the best scariest X-Files episodes – ever. Neither is it a countdown to the scariest scary episode either – we’d rather they were all judged to be equally good in their own right. So, sit down, turn the lights off, close the curtains and get ready to relive ten of The X-Files best scariest ever episodes… 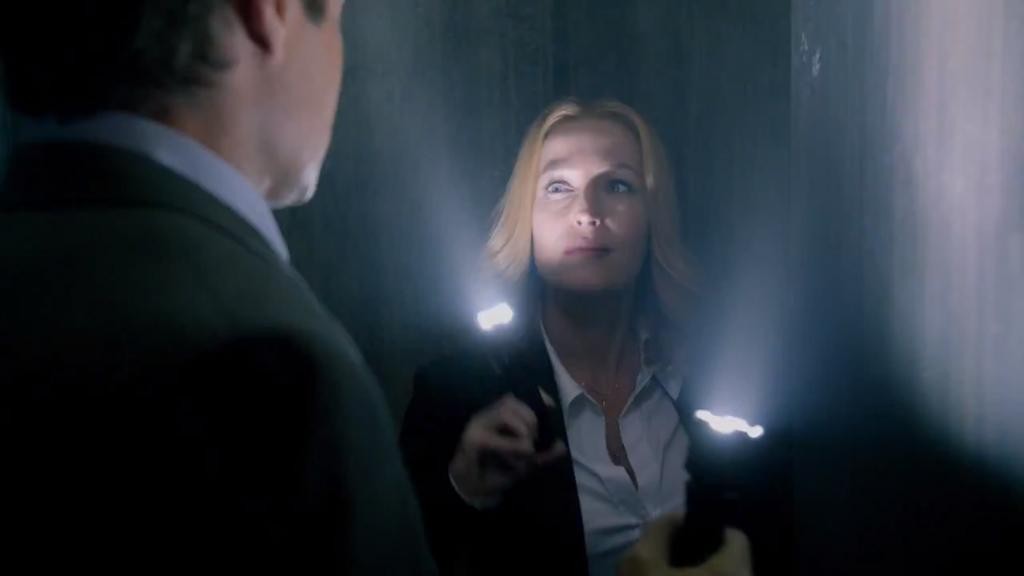 What happens: The gruesome discovery of a deformed new born baby leads Mulder and Scully to investigate their prime suspects – the freakish Peacock brothers. In doing so, the agents stumble upon the family’s shocking secret; a secret the brothers tried to bury when they disposed of the infant.

Why it’s scary: The Peacock boys; the horrific murder of Sheriff Taylor and his wife; the body under the bed; and the underlying incest theme. Imagery doesn’t get much more gruesome and shocking than this. Memorable, more for the wrong reasons than the right. This is definitely not one to watch before bedtime!

X-tra: Home was the first (although not the last) episode to be preceded by a warning about its mature and graphic content. Incidentally, sci-fi fans may recognise the ill-fated Deputy Paster; Sebastian Spence played Cade Foster in First Wave.

What happens: Death fetishist Donnie Pfaster turns to murder in order to satisfy his cravings. Whilst investigating the murder of one of Pfaster’s victims, a prostitute, Scully unwittingly becomes Pfaster’s next target.

Why it’s scary: From his ultra creepy voice to his strange obsession for hair, Donnie Pfaster sends shivers down the spine. The seemingly normal – at least on first impressions! – boy next-door types like Pfaster are the most frightening kinds of monsters. The mere thought that the boy next door in the button down shirt could be the devil in disguise doesn’t bare thinking about.

X-tra: The music played at the funeral is ‘Trois Gymnopedies’ (first movement) by Erik Satie.

What happens: When an FBI Agent on routine surveillance of a religious cult dies mysteriously, Doggett and Skinner investigate a murder spree where the killer leaves no trace of his crimes.

X-tra: Yet another episode that earned itself a viewer discretion warning for its violent and graphic content. Oh, and if you think the killer’s modus operandi seems vaguely familiar you’re not wrong – it bears more than a passing resemblance to Nightmare on Elm Street’s Freddy Krueger.

What happens: The mysterious death of a toddler at an amusement park and the subsequent deaths of two other members of the same family leads Mulder and Scully to an unlikely suspect. But it turns out their young suspect is in fact possessed by an evil spirit – the spirit of his stillborn twin brother.

Why it’s scary: From the deeply disturbing teaser sequence to the exorcism scene, this is one frighteningly creepy episode. Made all the more so because it involves the death of a young child. Although the denouement may be nothing new, it’s nevertheless riveting. But hands up all those who were disappointed by the lack of head-spinning, pea soup vomiting moments?!

X-tra: Upon its original terrestrial transmission, a BBC announcer warned viewers about the programme’s content; specifically that it contained scenes that some viewers could find upsetting.

What happens:  On vacation in Maine, Scully stumbles across a supermarket where shoppers have inexplicably mutilated themselves, and the butcher apparently committed suicide. Prime suspect is Melissa Turner and her eerie-looking young daughter.

Why it’s scary: From the Child’s Play-like doll to the shoppers clawing at their eyes, this episode is littered with nasty imagery. Never mind that the evil enchanted doll idea isn’t exactly original, Polly and Chinga still make for one scary double act.

X-tra: Chinga was co-written by horror supremo Stephen King (with Chris Carter). The episode is also known as Bunghoey due to the original title being a rather vulgar Spanish colloquialism!

What happens: Mulder and Scully investigate the grisly murder of a teenager in a small town populated by dark rites and devil worshippers.

Why it’s scary: The entire episode is chock full of dark themes (repressed memories, ritual abuse) and creepy moments. Oh, and one ultra creepy character – Mrs Paddock! Not to mention the pig embryo hallucination scene – yuck! Thank goodness I never had to dissect animals in science class at my school!

X-tra: The title is German for ‘The Hand, The Pain’.

What happens: Mulder and Scully find themselves battling the dark forces of voodoo whilst investigating a series of unusual deaths involving US soldiers assigned to oversee the incarceration of Haitian refugees.

Why it’s scary: Lots of ooze and yucky stuff. Most notably the closing scene at the cemetery. Scully’s hallucination is hair-raising stuff. Not one for the faint hearted. You just might want to keep your remote control to er, hand – excuse the pun!

X-tra: Callum Keith Rennie appears as the groundskeeper. Rennie played the part of Ray Kowalski in the popular TV series Due South. This episode was the highest rated episode of the first two seasons.

What happens: An imprisoned serial killer claims he was possessed by an evil spirit. Mulder becomes obsessed with the case, causing him to clash with the agent in charge of the case who just so happens to be his former mentor.

Why it’s scary: An over the edge Mulder on a path of self-destruction; the killer’s victims made into gargoyles – eek! Overall, a psychologically scary episode which makes the real world as it were seem a very, very frightening place indeed.

What happens: Agent Scully goes solo to consult on a murder case involving the mysterious death of a traveller beaten to death. She finds herself stuck in a remote town with a bunch of truly creepy townsfolk, who are part of a religious cult who worship a giant, slug-like creature.

Why it’s scary: Where to begin?! This episode has probably the most violent teaser in X-Files history; the brutal murder of a disabled man who has his skull viciously bashed in is distressing to say the least.

X-tra: This episode was partly inspired by the 1955 movie Black Day at Black Rock, starring Spencer Tracy. The creature was designed to resemble a banana slug.

What happens: The owner of a meat processing plant in a small town comes under investigation after people start to mysteriously disappear.

Why it’s scary: Cannibalism! One thing’s for certain, watching this episode will make you think twice about eating a certain type of fast food – for a while anyway!

This article was originally written for the Official X-Files Magazine, issue no. 5