What place does love and romance have in a sci-fi series? Well, much more than you’d think. At least in The X-Files universe. Cast your mind back to the Pilot episode; remember that scene where a scantily clad Scully bursts into Mulder’s room and asks him to examine the strange marks on her back?  Well, talk about sexual tension. It seemed inevitable that Mulder and Scully – two of the youngest and most attractive FBI agents in TV history – would become involved. It was surely only a matter of episodes before they got horizontal. Or was it?

From that moment onwards, some fans became very vocal in their desire to have the agents ‘get it together’ – romantically speaking. They would head straight to the Internet and numerous online groups to share their comments with other likeminded fans. Of course, Mulder and Scully didn’t get it together immediately. Oh no. We had to endure years and seasons of teasing and flirting. And let’s be honest, we couldn’t get enough!

And so we begin our look at some of the best, most memorable shipper moments starting where it all began, with the Pilot…

Having discovered some strange marks on her back, similar to the two small marks found on the bodies of the four dead teenagers they are investigating, Scully rushes to Mulder’s motel room and asks him to check them out. She drops her dressing gown and even though she is only wearing her bra and pants, Scully allows her partner (whom she only met a few hours ago!) to get up close and personal. Mulder reassures her that they are just mosquito bites. A very relieved Scully pulls up her dressing gown and embraces him.

Scully is diagnosed with having cancer. She admits herself to a special clinic to undergo radical treatment for the disease. Arriving at the hospital, Mulder panics when he discovers Scully’s room empty. He finds her comforting a dying friend.  He tells Scully he was scared something had happened to her. But she tells him that she is not going to let the cancer beat her; she’s got things to prove. Mulder smiles and they fall into each other’s arms. He tells her the truth will save her; it will save them both. He then cups her face in his hands and tenderly kisses her on the forehead.

On the trail of semi-human creatures that have the ability to turn invisible, Mulder and Scully become separated from the other two members of their group who presumably have been attacked by the invisible predators. Scully and an injured Mulder take shelter overnight. A slightly feverish Mulder outrageously flirts with Scully, telling her that the best way to regenerate body heat is to share a sleeping bag with somebody else who’s preferably naked! Scully replies that if it rains sleeping bags he might get lucky!

Mulder, Doggett and Reyes team up to safeguard a pregnant Scully from aliens intent on harming her and her unborn child. Agent Reyes manages to get Scully to safety but as she prepares to give birth, they are surrounded by a crowd of aliens. Scully gives birth to a healthy baby boy and the aliens silently leave. Back at her apartment, a glowing Scully introduces Mulder properly to her baby – their baby.  She’s named him William in memory of Mulder’s father. As Mulder cradles their son, he leans over and kisses Scully tenderly on the lips.

The agents take a boat out to search for a lake monster called Big Blue whom locals attribute a series of deaths to. But something big crashes into their boat and they have to abandon the sinking boat. Stranded on a large rock, they begin to open up to each other and when Mulder coyly asks Scully if she’s recently lost weight, his partner thanks him for noticing. But then she realises that he was just teasing her. Their conversation gets even more deep and meaningful, and Scully compares Mulder’s obsession for the truth to Captain Ahab’s hunt for Moby Dick. Afterwards, Mulder grins ands asks Scully if she’s coming on to him!

A tale about a talented alien baseball player who hid amongst an all African American team in Roswell, New Mexico during the 40’s prompts Mulder to show Scully the finer points of the game. As an early – or late – birthday present, Mulder offers to teach Scully how to play baseball. She meets him at a Washington public park. He asks her if she’s ever hit a baseball. Scully says she’s found more necessary things to do in her spare time. They stand together in the batting cage; Mulder puts his arms around Scully and together they hit ball after ball into the night sky.

Mulder and Scully investigate a government cover-up of a UFO shot down over Iraq and transported to the US. Seeking help, Mulder takes Scully to meet the Lone Gunmen – an extreme government watchdog group. Back at their office, she tells her partner that they were the most paranoid people she has ever met. Referring to Frohike’s observation, Mulder rather coyly replies that he thinks it’s remotely plausible that someone might think she was hot.

Eugene Tooms is released from Druid Hill Sanatorium. Convinced it’s only a matter of time before he will kill again, Mulder conducts an unauthorised surveillance of the liver-loving fiend. Scully arrives (with provisions: root beer and a sandwich) to take over the stakeout from Mulder .  Mulder is worried she could get in trouble; he doesn’t want her risking her own career. But Scully tells him that she wouldn’t put herself on the line for anyone but him. Mulder tells her it could be love if she’s brought him an ice tea. But Scully tells him it must be fate – it’s root beer. 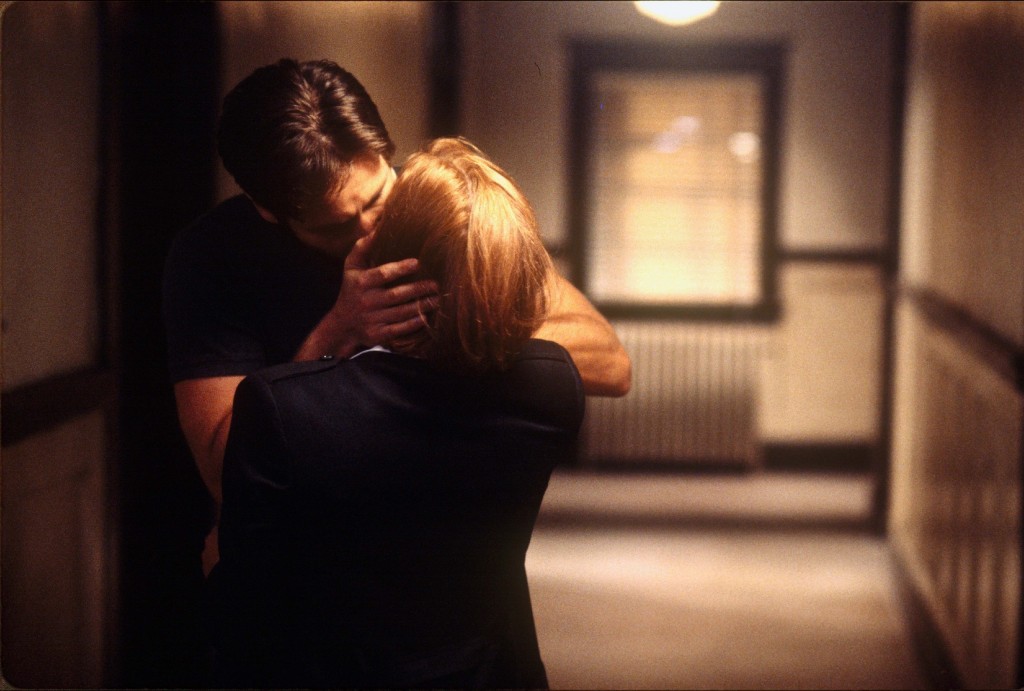 Mulder and Scully’s investigations into the bizarre genetic experiments of an amoral scientist leads them to the Great Mutato – a modern day Frankenstein’s monster. Discovering that he isn’t a monster at all, they take the Cher loving Mutato to see her in concert. As Cher belts out Walking in Memphis, Mulder suddenly leaps to his feet. He holds out his hand and invites Scully to dance with him. No words are needed and they dance happily, beaming at each other, until the music ends.

Mulder and Scully team up with Frank Black to prevent members of the Millennium Group bringing forth the apocalypse before the new Millennium. Minutes before midnight, the agents watch the celebrations in Times Square on TV. Mulder glances over at Scully, then he leans in close and their lips meet in a kiss. When they pull away, they share a knowing smile and Mulder comments that the world didn’t end. ‘No it didn’t’ replies Scully.

A trip to the Bermuda Triangle causes a time warp and lands Mulder in hot water on an English luxury liner that disappeared in the 1930’s just prior to World War two. Onboard, he meets many familiar faces, including a Scully look-alike. Mulder tries to make her believe that the ship they are on has been caught up in a time warp and that if she doesn’t convince the crew to turn the ship around the course of history will be changed forever. Realising that he may never get a better chance, he grabs her and kisses her on the lips, long and hard. But her response being a right hook to his jaw!

A deadly game of Russian roulette between Mulder, Scully and Pusher – a man who has the ability to bend peoples minds – ends with Pusher’s hospitalisation. Mulder and Scully stand by his bedside. Pusher is in a coma. Mulder tells Scully that her opinion of Pusher was correct; he was always a little man and this was something that made him feel big. Scully tells Mulder that they shouldn’t let him take up anymore of their time. And she gently slips her hand into his.

Mulder returns to Washington and gets a ticking off from Skinner for travelling to an alien contact site in Puerto Rico and abandoning a routine assignment. To make matters worse, he discovers the tape he made as evidence of extraterrestrial contact is blank. He tells Scully that although he doesn’t have the X-Files anymore, he still has his work; and he has her and he has himself.

The Field Where I Died (Season 4)

Mulder and Scully investigate a fanatical religious cult and meet a woman who may have been Mulder’s soulmate in a past life. Mulder asks Scully if early in the four years they’ve been together, someone told her that they’d been friends together always, would it have changed the way they look at each other. Scully tenderly replies that even if she’d known for certain, she wouldn’t have changed a day, except for ‘that flukeman thing’ – she could have lived without that just fine.

Mulder and Scully go undercover, posing as a married couple to investigate the mysterious disappearance of several residents of an upscale, uptight suburb. Under the guise of Rob and Laura Petrie, they move into the house that was occupied by David and Nancy Kline – the most recent inhabitants who disappeared without a trace. Once inside the house, Scully pulls out a camcorder and begins to film the interior as she narrates her case notes. An unusually flirty Mulder steps in front of Scully’s lens and teasingly asks if she wants to make their honeymoon video.

The agents take time out during their investigations into a religious cult that may be linked to the disappearance of several teenagers, to enjoy a meal at a local restaurant. Scully comments on the food – they’re eating spare ribs – and Mulder notices a smear of sauce on her cheek. Without saying a word, he leans over and dabs it away with his napkin. Scully appears to be a little embarrassed but then she smiles wryly, enjoying his attention.

In hospital after his bizarre encounter with a 1930s Scully look-alike and a bunch of Nazis on board the Queen Anne luxury cruise liner, Mulder tries to convince Scully, Skinner and the Lone Gunmen that it wasn’t just a dream. As Scully starts to leave, Mulder calls her back. He props himself up on one elbow and as Scully leans in close, he tells her that he loves her. To which Scully replies ‘Oh brother’ and walks away. Mulder then feels the bruise on his jaw; it wasn’t a dream after all!

Reports of alien fertilisation on humans causes Scully to question her own pregnancy and more importantly, its conception. In flash back, Scully thinks back to the previous year. She finds Mulder in her apartment. She tells him that her last chance of getting pregnant through artificial insemination has failed. Mulder tries to comfort Scully; he places his hands on her shoulders and tells her to never give up on a miracle. He then leans forward and gently kisses her on the forehead.

A weary-looking Scully turns up at Mulder’s apartment. She informs him that she has given her resignation to Skinner. She’s quitting. Mulder tells her that he can’t carry on without her. He can’t do it alone; he doesn’t want to do it without her. Touched by his honesty and vulnerability, Scully walks towards Mulder and embraces him. They pull apart slightly and Scully kisses his forehead. They gaze at one another briefly and slowly, Mulder leans closer; his lips slightly apart, he puts a hand behind Scully’s neck to draw her to him. But just as they are about to kiss, Scully gets stung by a bee!

From The X-Files Best Shipper Moments; an article originally published in the Official X-Files Yearbook 2002.