For the past three years, Tse Yin Chang has been working her creative magic to help produce the Chung Wah Association’s flagship magazine. Tse Yin spoke to Kate Anderson about how she came to be involved with the Chung Wah Magazine, and what led her to choose a career as a graphic designer. 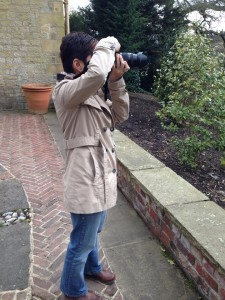 “Like most freelance designers, you’ve always got one eye open looking for more work to help your business grow. I remember browsing through Gumtree one day and I came across an ad the Chung Wah Association had placed for a graphic designer,” explains Tse Yin.

“At the time I was looking to expand my freelance business, so I enquired, popped along for a chat, showed them my portfolio and ended up getting the job. I guess it was a question of right time, right place.”

As a web and graphic designer, Tse Yin works with images and text to create material that is visually appealing, be it to convey a message or promote a product. On any given day she can be working on the layout for a magazine, designing a new website or working on branding solutions, such as creating a logo.

“Basically it’s my job to make things look good,” she says with a smile. “Okay, I’m just joking; it’s not quite that simple.

“I’m a visual-thinking problem solver. Of course it’s not just about making something look good.”

Tse Yin began her career working as a web designer for an advertising agency, before setting up her own business in 2005. She also works with Western Australia’s popular music festival, Fairbridge Festival, volunteering her design skills.

“I put a lot of time and effort into my graphic design work for Chung Wah. It’s not my full-time job; I’m a partial volunteer. But whether I’m getting paid or working for free, I believe that what I produce reflects on my skills and professionalism. So I’ll always give 110 per cent.”

Tse Yin was also responsible for the Chung Wah Association’s new look website, which went live earlier in the year. It’s proved to be a huge success, both in terms of visitor traffic and feedback.

When touching upon the skills needed to pursue a career in graphic or web design, Tse Yin says you don’t necessarily need to have a formal education to break into the field. But for those of you just finishing school, a design degree will provide you with the opportunity to meet and work with other up-and-coming designers, as well as mix with cool creative folk and get access to design resources and guidance from professional tutors.

“I never went to design school. In fact, I have a commerce degree! But I learned by reading books, practising my craft and working in the field for free to build up my portfolio.

“What you really need to become a good designer is practise, practise, practise. It’s extremely important to have an impressive portfolio of work to show off your artistic fair and creative eye. You won’t get a job, paid or otherwise, without one.

“Oh, and don’t think you have to be great at drawing to be a good graphic designer either, because you don’t. Which is great, because my drawing skills are pretty much limited to stick figures!”

10 things NOT to say to a graphic designer

“Can you make it look like this, but better?”

“But my target market is everybody.”

“I don’t really have a design idea yet, but can you tell me how much it would cost?”

“I love the logo, but can you just make it pop a bit more?”

“I love the design, but can you do another 5 or 6 and come back to me with them all?

“Can you jazz it up a little?”

“Can you do lots of versions? I’ll know what I want when I see it.”

“We haven’t finished writing the copy, but can you design a draft?”

“You’re the designer, you’ll know what to do.”

“Can you bold and underline all the text so it stands out?”

Article originally written for and published in the Chung Wah Magazine, volume 24 July 2015